The property at Beacon (bought in February 1931) was once the site of a woolen mill, where blue serge cloth was made for uniforms during the Civil War.

The mill buildings (numbered 1-6) down by Fishkill creek were remodeled, and several Truscan (steel) buildings were erected around the quadrangle. Building 1 became the main laboratory building, housing many of the departments.

In addition to a General Office and a Library, the original departments in 1931 included Treating, Dewaxing and Filtration; Organic (which later split into Fuels and Lubricants); Analytical and Testing; Mechanical; Engineering and Drafting; Distillation; Gas; Asphalt; and Physical Research. The Standardization Department opened in 1933.

The original campus included several houses which were eventually razed. The head of the laboratory, then called the superintendent, lived in House No. 1, once the mill owner’s home. A.V. Ritchie was the first superintendent.

The Lab opened with 125 employees, only two of whom were women-the telephone operator and the librarian. By May 1935 the staff had grown to 205. The third woman to be hired was a full-time nurse, in 1937. 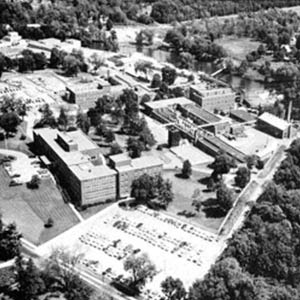 The start of World War II temporarily halted the expansion of the Laboratories. During the war, 216 members of the Labs went on Military Leave of Absence, and female employees were hired in great numbers for the first time. On July 30, 1945, there were 210 women-32.4% of the 648 employees.

The Laboratories received many awards for its contribution to the war effort. Considerable work was done on the development of new and improved products for use during the war, and on products for specialized uses. These included high performance aviation gasolines (and new methods of testing their performance), specialized lubricating oils, greases for operation at temperatures as low as 100 degrees below zero, and a non-floating grease for use on submarine rudders so that it would not cause a tell-tale oil slick.

Many projects were undertaken under direct contract for the Armed Forces. One of these was the development of a stand-by heater to permit instant starting of motor transport vehicles at 40 degrees below zero.

After the war, peacetime activities and expansion were resumed. The mid and late 1940s saw the construction of several new buildings including a jet combustion laboratory for the investigation of aviation jet fuels.

Up to this point in Texaco’s history, research activities came under the aegis of the Refining Department. On August 1, 1954, the Company’s Board of Directors established an independent Research and Technical Department headed by its own Vice President, F.H. Holmes. Giving research and technical service activities full corporate departmental status constituted a formal recognition of the importance of research to the Company as a whole.

In May 1956, the headquarters of the Research and Technical Department was moved to Beacon, and in recognition of this fact, the name of the overall facility was changed from Beacon Laboratories to Texaco Research Center. The Laboratory portion of the Center then became Beacon Research Laboratories (BRL).

The new status of research inspired another growth spurt at BRL during the 1950s. The Administration Building which had been completed in 1953, received a new wing in 1956. The Analytical and Testing Department which had grown to 140 employees (more than the entire Laboratory in 1931), moved into a building of its own (Building 65) in 1957. A Fuels Research Pilot Plant Building (Building 68) was occupied in 1959. Several smaller buildings for storage and specialized activities were also completed.

In January 1961, there were over 1,000 employees at the Texaco Research Center.

The Laboratories continued to expand. In 1961, blending operations were consolidated in a new Fuel and Lubricant Blending building (Building 70). A Heating Oil Laboratory was added to Building 68 to be used for the training of Company heating oil dealers and service personnel as well as for evaluation of fuels and equipment. The first “Installation and Service Training Course” was given in 1963.

One of the original mill buildings-the old Glenham Store-was torn down in 1963. The building (designated Building No. 20), which had been used for storage, was known to BRL employees as “The Jail” because the ground floor windows were equipped with iron bars. The building was built as a general store in 1865 by the Glenham Company, the original owners of the mill. Mill employees were permitted to make purchases on credit, and the amount was deducted from their pay each month. Other people came from miles around to trade there, and the building soon became the center of community life. Its top floor was a large social hall, where dances and other social gatherings were held.

SHIFTING INTO THE FUTURE

The country underwent a dramatic shift in consciousness in the 1970s. There was mounting concern about the effects of industrial activity on human health and the environment, and a dawning realization that our primary energy sources (oil and natural gas) were finite. Many of the activities at BRL over this decade addressed these concerns.

On June 1, 1971, the Company’s Board of Directors established the Environmental Protection Department, giving environmental affairs individual departmental status. The new Department (with headquarters in Beacon) was responsible for coordinating environmental protection activities throughout the entire world-wide corporate structure of Texaco.

A SHIFT TOWARD ENVIRONMENTALLY SOUND PRODUCTS AND SERVICES

From 1982 through 2003, the facility developed numerous advancements to meet increasing environmental requirements, including:

VIEW OUR GALLERY FOR MORE IMAGES FROM THE PAST
CLICK TO DOWNLOAD A PDF OF CHEVRON'S HISTORY
Menu
Recent News
Search
Follows Us: