SPECIAL CHARACTERISTICS OF THE PROPERTY, TOWN AND REGION

Beyond the historical significance, there are many features that enrich the former Texaco Beacon Research Center property and enhance the community. 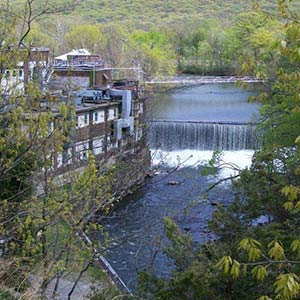 Fishkill Creek was realized as a source of water power early on, and the Braeburn Woolen Company capitalized on the opportunity. In 1917, the company rebuilt the dam on the creek to provide consistent flow of water for generating hydroelectric power for its mill complex, and later it generated power for the Texaco Research Center. Both the building that houses the hydroelectric generating unit and the dam, which was restored in 2012, are ready to ready for future hydroelectric generation.

The Sargent weeping hemlock’s hanging foliage cascades down to the ground, giving the tree a graceful, flowing appearance. Legend goes that four weeping hemlocks were found around 1860 by Henry Winthrop Sargent near Fishkill Mountain in what is now the town of Beacon, New York. It is said that from these four trees that all future generations of Sargent’s hemlock were propagated. Mature species can be twelve to sixteen feet high and twice as wide. 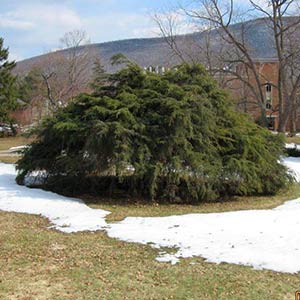 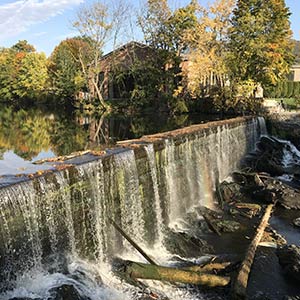 Fishkill, derived from two Dutch words: vis (fish) and kill (creek or stream), was formerly in the Wappinger Indians territory. Dutch immigrants settled in the area in 1714, and the village became centered in the major transportation thoroughfare connecting Albany to New York City, intersected by the route from New England to the Hudson River.

Fishkill played an important role in the Revolutionary War with the establishment of a vast military encampment. In 1777, the first 1,000 copies of the New York State Constitution were turned out on a press at Fishkill, and during the 19th century mills and factories sprang up in the hamlet of Glenham, which became a bustling industrial center. Texaco later established a research center there in 1931 and operated it until 2003. Today, the town’s industry is technology based and the farmland has been converted to residential housing. But the beauty of the area continues to attract new people, diversified businesses and tourists.

Located just 60 miles from New York City and 10 miles from Stewart International Airport, Fishkill puts metropolitan cultural and business advantages within reach, while providing a tranquil, away-from-it-all hometown feeling for its residents. A pleasant mix of residential, commercial and office space, surrounded by the foothills of the Catskill Mountains and the Hudson Valley, provide Fishkill with a solid tax base, yet a tranquil atmosphere. Recreation and leisure activities are growing in Fishkill. Civic, religious and community groups of nearly every description welcome new and old residents alike. Homeowner associations foster a sense of old fashioned neighborliness. Award winning schools are a source of tremendous pride in Fishkill. 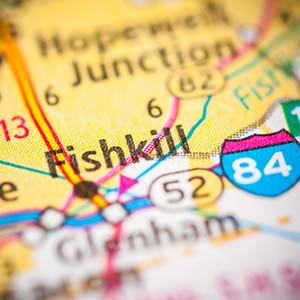 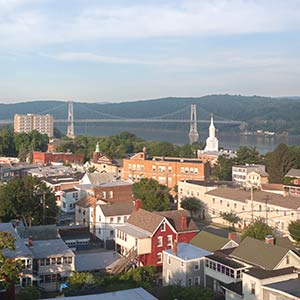 © 2017 Chevron Glenham Mills. | Terms of Use | Privacy Statement
Our Attributes - History and Special Characteristics of the Region